Painting Scotland from my van – welcome to my painting blog!

Lewis, Harris and Skye on the way back. 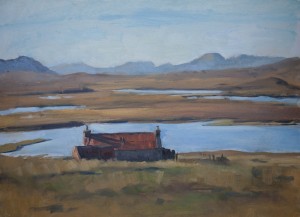 I have just returned from a painting trip to the Western Isles. It is an area of Scotland that I love and that I have been to on holiday with my family several times. This time I travelled alone with my painting gear in my VW California camper van to Lewis and Harris via Skye, taking the ferry from Uig, Skye to Tarbert in Harris.

I stayed first of all at Uig Sands campsite on Lewis. I had intended to paint the gorgeous beach at Uig with the Harris hills in the background but this time never quite got the weather or light I was looking for. I stayed in Stornoway one night and when driving back to Uig the next morning spotted a cottage in Achmore with the sun shining on its rusty tin roof and beautiful colour of the distant hills, so I set up my easel at the side of the road and started painting. 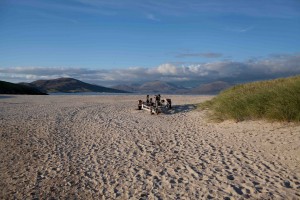 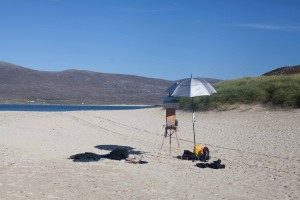 Harris was my next stop. I have always harboured a notion to move to Harris. The beauty of its Caribbean turquoise sea and white beaches, the drama of the hills and the lunar landscape of its rocky east coast (which was used to represent Jupiter in Stanley Kubrick’s 2001: A Space Odyssey) make it an extremely interesting place to paint. Finlay J MacDonald, in his very funny book about growing up in Scarista, Harris, ‘Crowdie and Cream’ tells the legend he was told as a child, that

“the Good Lord had made the world in six days and, when he was supposed to rest (as everyone should) on the Sabbath, he found a handful of jewels that he had meant for the Caribbean or some other exotic place and that he had forgotten to use. So as not to break the Sabbath more than was necessary he opened a window in heaven and threw the jewels out without bothering to check where they had fallen (some cynics claim he still doesn’t know) but they had strung themselves out along the north west of Scotland forming the long line of islands known as the Outer Hebrides.” 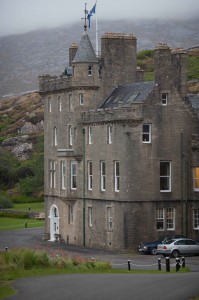 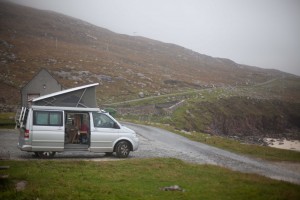 my painting set-up in my VW California

I spent a very windy and rainy day painting at Hushinish in the west of Harris (I am glad I can, in extreme conditions, paint from inside my van!). Hushinish is a beautiful beach and village- well four houses- lying at the end of a 12 mile single track road. The road, at one point, passes right next to the front windows of Amhuinnsuidhe Castle (I believe in the past the castle owners did try to get the road rerouted). Unfortunately it was too misty this visit to have a view of Scarp, the currently uninhabited island next to Hushinish where Gerhard Zucker had experimented sending mail by rocket to Harris in the 1930’s. I met someone who was travelling back and forward from Hushinish to Scarp, helping to build a house there for his sister. 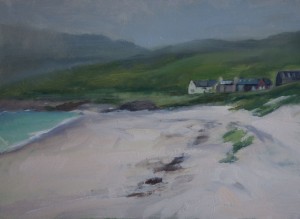 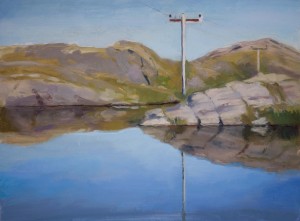 Loch Mula from the Golden Road

On the Sunday (when everything on the island is closed due to a strict adherence to Sabbatarianism) I took a trip down the Golden Road on the rocky east side of Harris. I stopped to paint Loch Mula near Stockinish. It was a very warm still day and the small loch resembled a mirror. It felt strange to be somewhere where there wasn’t a sound apart from fish in the loch and the occasional flapping of a bird’s wings. After a couple of hours I had a chance meeting with what I think were some of the island’s ‘Free Church’ community, a man and boy walking past on their way back from Tarbert. The man told me what I was painting reminded him of the 23rd psalm, “He leadeth me to still waters” 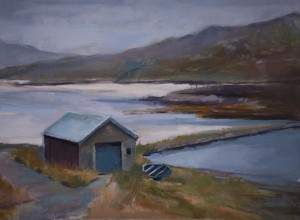 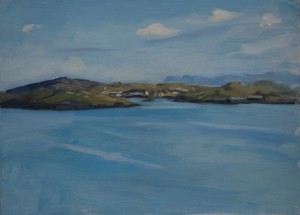 Having had a few wonderfully warm and sunny days the weather was about to take a turn for the worse so I took the early morning ferry back to Uig, Skye. I stopped for a coffee at the Sligachan Inn before stopping to paint a view of the Cuillins from the main road a little further on. Then drove through more incredible Scottish scenery, back home to North Berwick. 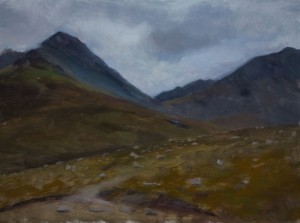